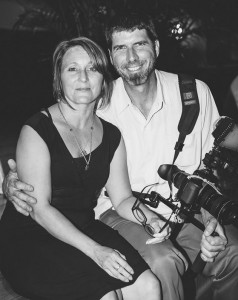 GreenPeas Productions, founded in 1997, is the award-winning husband and wife team of David & Lorretta. David is a 2-time Emmy Award Winner with 14 years of extensive video and photojournalistic experience with major television network affiliates. Lorretta has a background in theater and story-telling with a heavy emphasis placed on creative writing.

Together, David and Lorretta have teamed up to produce several major films and have won the multiple Communicator awards, and even a Telly Award!

GreenPeas Productions officially closed in December of 2018 as David and Lorretta have started working with a Non-profit NGO, Georgia CDR based in Eastern Europe.

Here’s an early logo design from 2000